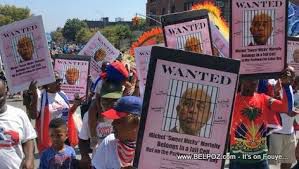 Today, Thursday, July 1st 2021 at 11am, KOMOKODA will be holding a press conference and protesting outside Bentley's Nightclub in Brooklyn to denounce the advertised performance of Michel "Sweet Micky" Martelly at this venue on Saturday July 10th, 2021 and to demand that the owner of the establishment Bentley Palace Corp., Carl Mentor, cancel this event. Furthermore, we are calling on all community and religious leaders, and elected officials to stand with KOMOKODA to stop Martelly from continuing to spew his misogyny and venom while laundering money stolen from Haiti's coffers.

Long before the fraudulent elections through which the US Government imposed Michel Martelly as president of Haiti in 2011, many Haitians denounced and shunned him as an entertainer because of the violent, obscene, and misogynous lyrics in his music. References to the masses of the Haitian population as stupid and smelling of feces, glorification of rape and all forms of abuse of women are common in his music. His time in office was marred by assassinations, arbitrary arrests, and detentions of political opponents; rampant corruption with the plunder of the national treasury, the theft of billions from Venezuela’s Petrocaribe program which was long-term, low-interest loans meant to help with the development of our country. Martelly also imposed an illegal money transfer remittance tax and a phone call tax on the Haitian diaspora, This tax was supposedly to be used to send every child to school but no one knows how many hundreds of millions if not billions he collected and what has been done with this money.

Organizations and individuals in the NYC Haitian community and in other parts of the Haitian diaspora have consistently protested Martelly’s presence whenever he has had an advertised public performance in our respective areas. Community pressure forced New York City Parks Summer Stage to cancel Martelly’s advertised August 21, 2016 free concert at Central Park’s Rumsey Playfield. We forced the cancellation of his August 31, 2018 performance promoted by his stooge Richard Urbain at Chez Mirelle’s in Westbury, Long Island. In the 2018 Labor Day Carnival, we vociferously protested Martelly’s presence throughout the parade route. Community pressure also forced the cancellation of his advertised March 22nd, 2019 performance promoted by Carl-Edouard Osias in Montreal, Canada.

The Haitian people are now fighting to topple another US backed dictator, hand picked by Martelly, named Jovenel Moise. Moise is currently illegally running the country as a member of Martelly's PHTK political party. Since he has been in power, the corruption started under Martelly has grown to unprecedented levels. He has been implicated in multiple massacres in impoverished communities that oppose his regime, politically motivated murders and detentions, arming and financing of street gangs involved in kidnappings and rapes; He has hired and brought US mercenaries into the country to kill Haitians. He is doing all of this so that he can maintain his grip on power that was never given to him by the Haitian people.

KOMOKODA's objective today is to stop Martelly's July 10th performance at Bentley's. In the event that Martelly is allowed to perform at Bentley's next week, we will protest the event along with the community. We are pledging to boycott this venue and all other public spaces that provide a forum for Martelly to continue his violation of the Haitian people through his vile and obscene performances until they are shut down. We call on other artists to take a good look at what PHTK has done to Haiti, to also stand with the Haitian people and to refuse to perform at venues that make their stages available to Michel Martelly.